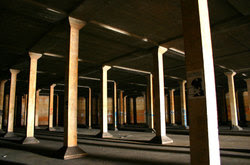 Jherek Bischoff, the Ambient Chamber Orchestra and the cistern.
“Writing about music is like dancing about architecture...” something my husband, Kurt, says from time to time, though it’s actually someone else’s quote. So if you’re trying to learn about ambient music, a brief trot through cyber links will quickly lead a person, amusingly enough, to learn of the French composer Erik Satie’s “furniture music” - so-named by Satie himself because it could as easily drift into the background of a dinner party as the furniture. Satie, according to the sites I visited, (check out www.ambientmusicguide.com) is unanimously considered the originator of ambient music.
Last night I had the pleasure of performing with Jherek (http://jherekbischoff.blogspot.com) as a violist in the Ambient Chamber Orchestra at the Chapel Performance Space. I met Jherek pretty recently and ran into him not too long after at the Deep Listening Band’s phenomenal “Great Howl at Town Hall” where this iconic group, whose members include Pauline Oliveros and Stuart Dempster, two personal musical heroes of mine, played a simply amazing show inspired by the extraordinary echo in the 2 million gallon now-empty water cistern underground at Fort Worden State Park. At 45 seconds, it is a crazy-long musical hang time.
The cistern, dubbed “Washington’s Official Instrument”, has become popular among recording artists as a great natural acoustic site. If you want to record there, you have to get a permit from the park - one paragraph of the application reads:
“The cistern is defined as a "confined space" by Washington State Department of Labor and Industries. It does not meet any of the safety requirements established by that agency. It does not have a "safe" access hatch, does not have a "safe" ladder, and to be legally correct the air quality (oxygen levels, etc.) must be tested before entry and then monitored during any occupation.”
And you have to have an above-ground contact person waiting with cell phone in hand at the opening in case of emergency!
Evidently, it is not only the long echo but also the way that sounds ping off of the pillars, reinforcing, reflecting and canceling out harmonies that provides a singularly remarkable musical environment.
Jherek got a residency at Fort Worden’s Centrum, the famous arts center, and was able to compose music in the cistern. The result was the music we presented last night.
I didn’t know that much detail about ambient music, except that my two sons are into electronic dance music, so I did a rather cursory investigation, aided in part by Wikipedia, and here is what I learned.
· Ambient music prioritizes instrumental timbres over vocals, or if it does use vocals, focuses on the quality and types of sounds produced rather than lyrics.
· Erik Satie and Claude Debussy were the forerunners of this music, as they busted apart older musical forms that were narrative in nature to create much more open and spacious forms.
· John Cage’s 4’33” is considered a seminal work as it encouraged listeners to open their ears to sounds in the present environment.
· Karlheinz Stockhausen’s early work with tape collages was a precursor to modern digital sampling.
· Bands like the Beatles and Pink Floyd explored the studio capabilities of electronic music - distancing themselves from the dominance of lyrics and opening up the rich instrumental possibilities of rock music.
· Ambient musicians don’t like being conflated with New Age, which they consider bland and banal.
· Brian Eno’s “Airport Music” is big in the ambient world.
· Minimalist composers like Philip Glass and John Adams, though their music is not specifically ambient, inspired bands with their exploration of musical repetition over vast expanses of time.
· Everyone should check out the Velvet Underground. Also Tangerine Dream and Moby.
· Downtempo electronic dance music like house, progressive, techno, trance and psy-trance, hip hop, breakbeat and electronic dub are contemporary iterations of ambient music. I only have visibility to this music through my kids, who are big devotees (though they, I believe, have extremely specific tastes within these genres.)
Lastly, I really enjoyed seeing some listed examples of ambient music. Some I’ve already experienced, and some I’m looking forward to hearing for the first time.
Here’s my edited list:
Movie soundtracks:
Forbidden Planet
2001, a Space Odyssey
Clockwork Orange
Eraserhead
Blade Runner
Donnie Darko
Lost in Translation
The Social Network
Musicians/bands/organizations:
Erik Satie
John Cage
György Ligeti
Radiohead
Nine Inch Nails
NASA (Voyager recordings - “Symphonies of the Planets”)
Brian Eno
Kraftwerk
Enya
SETI
Anyway, the Chapel was packed and it was a beautiful show. Glad to have been part of it.
Posted by Unknown at 1:20 PM 3 comments: Links to this post

4 stages of learning a piece.

I've been teaching and performing for many decades now, and I've realized that in too many instances, students get stuck at a certain level of musical preoccupation. I wanted to articulate a little more clearly what seems to be the learning arc when coming to terms with a piece of music. So I wrote up this list of 4 stages of learning a new piece. Because I'm obsessed with anagrams, you will see that the four steps form a call to action...
Here 'tis:

this is the initial phase of encountering a piece of music: hearing it, sightreading, noticing moments of beauty, confusion, or interesting character. getting a sense for the challenges that lie ahead in the learning process, finding commonalities with other music, identifying personal technical difficulties and areas of incomprehension.

the practical phase. making sure you are playing all the correct pitches and rhythms. working out articulation. developing technical skills necessary to serving the specific piece. finding the right tone of voice to convey the character of the music. crafting phrases and seeking to create the right texture of sound.

this is the deep emotional work. memorizing not only the sequence of notes but also the dramatic landscape of the music. this work may be done away from the instrument, visualizing the unfolding of the score. it may occur while doing a run-through of a section of the work. this is when the musician makes the piece a part of his or her own being. listening to other recordings may be helpful, but forgetting recordings may also be necessary, so as to cultivate the musician’s own voice. this is when all the carefully worked out details coalesce into a larger whole, and the music seems to become “of a piece”, or singularly cohesive. this work can be done alone, with a teacher, and/or with colleagues.

this is when you get to share this new part of your being with your lucky listeners! you have done all the hard work of studying the score, teaching yourself new ways of listening, moving and being, and you are now an authentic agent of this particular work. as you stand (or sit) before your audience, trust yourself and focus on the moment. you don’t need to worry about that hard part coming up: you’ve put in the work and internalized what you need to do to be able to execute that difficult passage. allow irrelevant thoughts or nervous mental chatter to fall by the wayside and just play your instrument. and don’t forget to smile at the audience when they reward your great work with enthusiastic applause!

What would you add? It seems to me that too much of the teaching process focuses on stage II.

Posted by Unknown at 11:12 AM 4 comments: Links to this post